The Clam Bay Natural Resource Protection Area (NRPA) is unique. It is the only coastal Natural Resource Protection Area in Collier County and its estuarine is rich in biodiversity. The threats to it are numerous and ever-present and include conflicts of use, encroachment on wetlands, inappropriate dredging, run-off and water pollution, powerboat wake, littering in the forest, and mangrove-cutting (as opposed to trimming).

​ Scroll down:  These issues are not listed in the order of their importance.   ﻿ 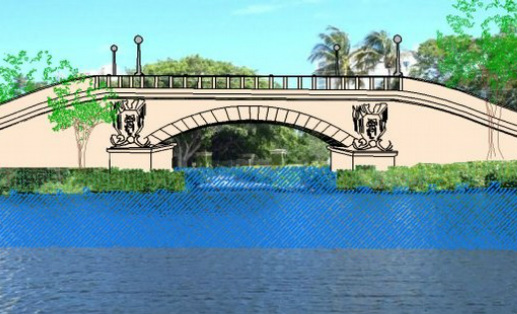 Rendering of Proposed Bridge, photo by Mike Bauer
﻿    ﻿The two bodies of water are separated by ﻿ three small culverts under Seagate Drive.    These permit a small exchange of water between Outer Clam and Moorings bays.
Seagate and another homeowner group  propose removing the culverts, opening the space they occupy and building a bridge to span the area so that the waters would mingle.
It would allow large-draft powerboats from Seagate to access the Gulf via Moorings Bay, 24-hours a day. The proponents'  rationale says it will benefit Clam Bay which they say is impaired.   MAG strongly object/
Moorings Bay is lower than Outer Clam Bay.  Hydrologists predict a bridge could cause de-watering (a draining) of Clam Bay harming  (if not destroying) mangroves and marine nurseries.

IV.  Mining and use of Beach Sand

The Clam Bay Management Plan was elaborated through 27 publicly noticed meetings and all possible stakeholders: neighbors, kayakers, canoers, environmentalists, scientists, etc. were invited to attend. Unfortunately no residents of Seagate or Naples Cay chose to attend to voice their opinions or offer suggestions, contradicting a public statement about Pelican Bay’s "apparent disregard for all stakeholders that live around the estuary".
In answer to criticism about the Pelican Bay Services Division's role in managing the Clam Bay NRPA, so designated by the BCC, please know the  PBSD took the initiative in 1997 to restore a 50 acre die off in the 650 acre area owned by Collier County - the die off occurred as a result of insufficient circulation of the waters within the 650 acre county owned land. In 1998 the PBSD obtained the permit to dredge the inlet and as a result dredging was performed in segments A, B, and C - all the way to the public bridge leading to Outer Clam Bay.
The actual dredging was performed in 1999 to avoid the turtle-nesting season in 1998. As you are aware Seagate in the city of Naples abuts the property owned by the county in Outer Clam Bay. This dredging deepened the waters from the Gulf all the way to the bridge, and resulted in better flushing of Outer Clam Bay, and simultaneously increased the depth of Outer Clam Bay.
It was stated that Seagate residents have had access to the Gulf for their powerboats for 50 years. You should be aware that for many years access was interrupted as the County placed water, sewer, electric & telephone lines attached to the opening bridge which made it impossible to open the bridge. These utilities were eventually placed underground so that the bridge - controlled by the Registry (now Naples Resort) - could be opened.
It should be clarified that the PBSD (or Pelican Bay) has never prohibited any vessel to proceed from the Gulf to Outer Clam Bay. To the contrary: The constant dredging has kept Clam Pass open to facilitate entry. Had the PBSD not dredged the pass, no one could even attempt to enter or exit the Clam Bay estuary. However deep-draft vessels have never been able to operate in and out of Clam Pass.
It may be helpful to add a little history. Many years ago the area north of Banyon Boulevard in Naples was a mangrove forest/wetlands - just like the Pelican Bay NRPA is today. It consisted of mangroves, and shallow meandering creeks. Then developers came in with big dredges: uprooting and destroying the mangroves; dredging and placing the spoils on wetland to create the Park Shore area, and opening the whole area for development. Sea walls were built and deep-water access was provided for all properties along the waterways. Doctors Pass was created with breakwaters.
On the other hand when Pelican Bay was created the developer deeded the 650-acre mangrove forest/wetland to the county in perpetuity - thus preventing the destruction of this last remaining mangrove waterfront property. As a result the meandering creeks were left untouched: shallow waterways accessible only by kayaks and canoes.
It was stated that, “Clam Pass Park beach is seriously eroded”.  All Collier beaches go through cycles. If you compare aerial photos taken when Clam Pass Park was created with current aerials photos, you will see there has been no erosion. To the contrary, the beach now extends northward by about 300 feet.
Lastly, the PBSD does not determine where dredged beach-compatible sand may be placed. This determination is made by USACE – the United States Corps of Engineers.  It is correct  that the dredging two years ago required that beach compatible sand be placed on the north shore of the pass – the Pelican Bay side. But this was required as the north side of the pass had seriously eroded and a building in its path was endangered. No such danger existed to the south. USACE engineers made this decision after an in loco investigation.

Mr. Domenie is a year-round resident of Collier County and Pelican Bay for 27 years, who served on the Pelican Bay Property Owners Association, the Pelican Bay Services Division (PBSD), and is currently treasurer of the Mangrove Action Group.